Added to wishlistRemoved from wishlist 0
Add to compare

Added to wishlistRemoved from wishlist 0
Add to compare
₹799.00
33% 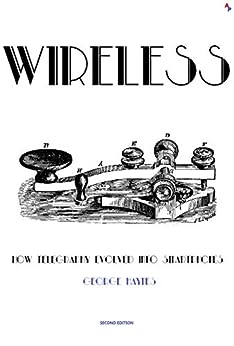 ·Before there was Radio:
Ampere experiments, early experiments with electricity and magnetism

·The Micro Disruptor:
Beginning of the Integrated Circuit and miniaturization trends

·Disruption on order:
Summary of mobile generations and their capabilities

·5G and Beyond:
Possible future generations of mobile

The origins of mobile communications can be traced back to the mid-1860s, when the Scottish mathematician James Clerk Maxwell produced a pair of equations whose solution predicted electromagnetic waves propagating at the speed of light. It took 20 years to verify this prediction in the laboratory, and another 20 years for the first “mobile” application to take place.

The ebook documentary chronicles the breakthroughs that followed, most unknown to many of us, to September of 1899, when Guglielmo Marconi ushered in the era of practical mobile radio communication with his historical radio telegraph transmissions from a ship in New York Harbor to the Twin Lights in Highlands New Jersey. The signal was received with a similar antenna attached to a fascinating device known as a “coherer,” a tube in which metallic particles were caused to cohere to one another by the presence of the radio signal. Here, we discuss the controversy surrounding its implementation and inventor.

Commercial radiotelephony for passengers on ships in the Atlantic was begun in 1929. By this time, radios were small and rugged enough to be installed in automobiles, and the first “land mobile” radio system was put into operation by the Detroit police in 1928.

Surprisingly, the origins of cellular can be traced to 1947, at essentially the same time that the first 150 MHz system was installed in St. Louis, the Bell System (AT&T) proposed a “broadband urban mobile system,” and requested 40 MHz for its implementation somewhere in the region between 100 and 450 MHz. At that time, the idea that a large geographic area could be served using many small coverage areas had already been put forward at Bell Laboratories, primarily to allow low-power radios to be used. The FCC denied this request, citing the unavailability of frequencies in that range.

Given the popularity of mobile voice communications and the Internet, it seems inevitable that they will soon merge in what has been called the “wireless Internet.” Initial email and Internet-based services have been offered in current second-generation cellular systems, with market results that have often fallen short of expectations. Designers and investors face difficult issues in shaping the next generation of cellular systems, but they can draw comfort from the realization that few technologies have demonstrated the benefits, popularity and rapid evolution that have characterized mobile communications for more than a century.
(Documentary)

There are no reviews yet.

Be the first to review “Wireless: Second Edition” Cancel reply

Re:Hub is modern all in one price comparison and review theme with best solutions for affiliate marketing. This demo site is only for demonstration purposes. All images are copyrighted to their respective owners. All content cited is derived from their respective sources.